In the late 1990’s, the SCSO employed two tracking dogs named Ashley and Tony. As these dogs left their positions, the Canine Unit program was put on hold until 2007 when the program was revived thanks to many generous donations from sponsors including Wal-Mart, Breckenridge Masonic Lodge #47 and the Summit County Republican Women.

K-9 “Tommy” joined the Summit County Sheriff’s Office on February 20, 2007 after a six-week training period with his handler, Sergeant Brian Smith. Tommy was acquired from the Vohne Liche Kennels in Denver, Indiana, a nationally known training kennel for police dogs. Tommy is a Dutch Shepherd and his duties include narcotics identification, patrol tracking, and building searches.

Tommy received the statewide 2007 Tracking Award from the Colorado Police K-9 Association. Tommy’s winning track was two and a half miles long, starting at the Summit Medical Center in Frisco and ending above Summit High School at Farmers Korner in search of a knifing suspect. Ironically, the suspect was found hiding in a doghouse and apprehended. 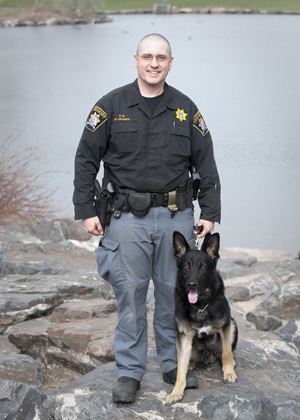 On June 6, 2008, our second K-9, “Bobby,” joined the Canine Unit with his handler Deputy Nathan Opsahl. K-9 Bobby is a German Shepherd and was also acquired and trained at the Vohne Liche Kennels in Indiana. He performs the same duties as K-9 Tommy.

The cost of a new dog and the training can vary from $10,000.00 to $15,000.00. The dogs are required to be certified with the state and nationally yearly. They are housed with their handlers and undergo training daily. Under the K-9 contract, the Sheriff’s Office owns the dogs for five years and then ownership is transferred to their handlers.

The Canine Unit is an invaluable asset to the Sheriff’s Office as well as to neighboring law enforcement agencies. Summit County is fortunate to be supported by a community willing to partner with law enforcement to make our county a safer place.