Ballots Mailed to Military & Overseas Voters: Ballots go out according to the voter's indicated method of transmission (Mail/Email/Fax) before the statutory deadline of September 17, 2021.

Early Voting by Mail or Secure Drop Box: Active, registered voters will begin receiving ballots the week of October 11, 2021.  Ballots may be obtained and cast until 7:00pm Election Day.  *The County Clerk has to be in possession of the ballot by 7:00pm on Election Day.  Postmarked ballots that are not in possession of the County Clerk by 7:00pm Election Day will not be counted (UOCAVA Voters excepted) in accordance with Colorado Election Law.

Free USPS Informed Delivery Service: Sign up for this free service online through the U.S. Postal Service to see when your ballot arrives.

Early In-Person Voting: Begins Monday, October 25, 2021 in Breckenridge only.  Click on the "How to Cast Your Vote" tab above for specific dates and times.

Didn't get to the Post Office or one of the 24-hour drop boxes?  Absolutely must have that "I Voted" sticker to wear all day?  On Election Day, swing by whichever Summit County Voter Service Polling Center is convenient for you with your Summit County ballot.  VSPCs are open between 7:00AM and 7:00PM on Election Day.

Didn't receive your Mail Ballot? New to Colorado? You can register to vote, update an existing voter record and cast your vote at a Voter Service Polling Center before Election Day. Note: you do not need to vote at the nearest polling center to your residence, but voters are required to vote within the COUNTY they reside in. The only location available for Early Voting is the Breckenridge VSPC, located at the South Branch Library at 103 South Harris Street in Breckenridge, CO 80424.

The Early Voting Voter Service Polling Center in Breckenridge will be open the following dates/times:

Didn't receive your Mail Ballot?
Register to Vote, Update an Existing Voter Record, and Vote on Election Day at the below listed Voter Service Polling Center locations in Summit County. Note: you do not need to vote at the nearest polling center to your residence, but voters are required to vote within the COUNTY they reside in.
Election Day for the 2021 Coordinated is Tuesday, November 2, 2021
Summit County Voter Service Polling Centers (3) will be open from 7:00am to 7:00pm on Election Day

Sample Ballot Style: EMS Property Owners registered in Colorado who own property within the boundaries of the Summit Fire & EMS District)

Check out your specific sample ballot by looking up your voter record at: www.GoVoteColorado.gov

Blue Books are mailed to all households in Colorado tied to a Registered Voter.  They do not contain County and Local content, only Statewide ballot content.

TABOR Notices are mailed out the first week of October to all households tied to a Registered Voter in Summit County.  They contain County and Local content that falls under TABOR.

REGISTER TO VOTE ONLINE THROUGH THE COLORADO SECRETARY OF STATE

Register to vote -or- view or update your existing record online: Secretary of State's website.

In order to register to vote, you must be:

REGISTER/UPDATE YOUR RECORD WITH A PAPER FORM 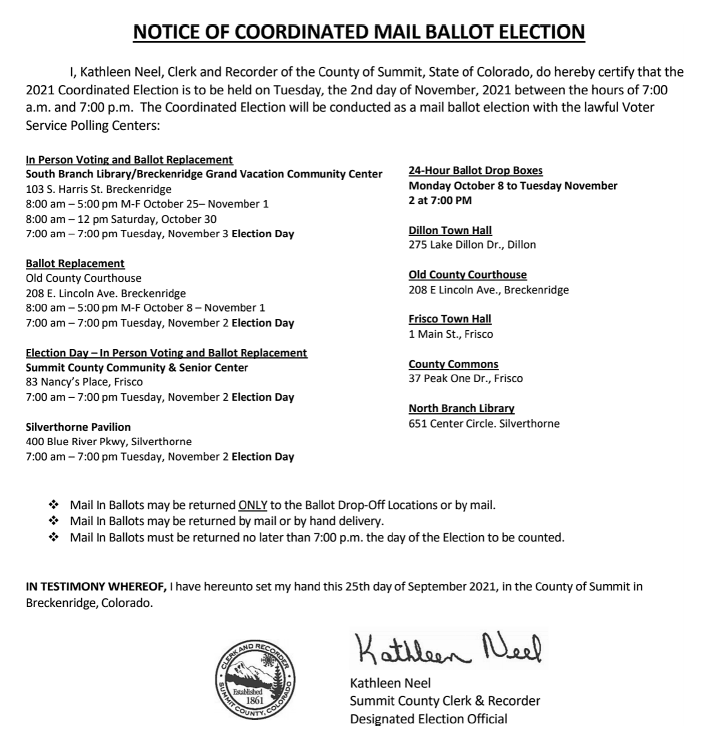 The Summit County Logic & Accuracy Test, testing the fleet of voting equipment for the 2021 Coordinated Election was successful and without discrepancy.

Q1. What is a risk-limiting audit?

A1. A risk-limiting audit is a post-election audit that gives a statistical level of confidence that the outcome of an election is correct. In other words, after performing a risk-limiting audit, we can say that there is a high probability that the reported winners accurately reflect how voters marked their ballots.  This video, created by the Colorado Secretary of State in 2018, showcases the Risk-Limiting Audit process in Colorado.

Q2. What is the risk-limit?

A2. The risk-limit tells us the probability that the audit would correct a wrong outcome. For example, an audit with a 5% risk-limit means that if an election has the incorrect reported outcome, on average 95 times out of 100 the audit would catch that incorrect outcome and correct it. If the reported outcome of the election is correct, then the audit offers a very strong level of evidence of that outcome.  Colorado began RLAs with a 9% risk-limit in comparison audits, and has reduced that number to 3% as counties got more comfortable performing the audit.  Technical information on audit can be found on the Colorado Secretary of State's risk-limiting audit resources page.

Q3. What kind of risk-limiting audits are there?

A3. In Colorado, all counties participating in the audit conduct comparison audits. Historically, some counties with voting systems incapable of exporting a cast vote record conducted a second type of RLA called a ballot polling audit. Any county that hand counts all of their ballots instead of using a voting system to tabulate does not participate in the RLA because it is an audit of the voting system.

Q4. How does Colorado perform the audit?

A4. During a comparison audit, counties are given a list of specific ballots to examine and then replicate the voter markings in an open source software application created by the Colorado Department of State specifically to facilitate the audit. Further details about the audit can be found in the next few questions.

Q5. How are the ballots to audit chosen?

A5. Each county creates a ballot manifest that describes how many ballot cards have been counted, in terms of batches and the number of ballots in each batch. A pseudo-random number generator with a random seed, generated by rolling 20 ten-sided dice during a public meeting, is used by the audit software to randomly select ballots from the ballot manifests. Since the audit is based on statistical confidence, the number of ballots that are chosen to audit is based on the margin of the race that is targeted. The closer the margin, the more ballots are audited to confirm the outcome.

Q6. What are target contests?

A6. Since the number of ballots chosen to audit in a contest is based on the margin of victory in a race, to perform a risk-limiting audit the auditor needs to designate what races will be used to drive the audit. The Secretary of State chooses the races to target (at least one in each county and one across the whole state) by the Friday after an election. The results of the audit in these targeted contests also determine if counties must do more than one round of auditing. However, even though targeted contests drive the audit, audit boards examine and reproduce voter markings in all of the contests on the ballot and staff at the Department of State look at all choices to make sure nothing unexpected is occurring.

Q7. What occurs during the audit?

A7. Bipartisan audit boards examine the ballots selected by the audit software and reproduce the voter markings in the software. If all of the markings in the targeted contest match between what the audit board reports and what the voting system recorded, the audit has gathered enough evidence to say with a high level of statistical confidence (based on the risk limit) that the reported outcome of the targeted race (what the voting system reported) match how the voters actually marked their ballots.

Q9. Why do discrepancies happen?

A9. There are many reasons that discrepancies may occur. The most common reason is that the audit board retrieved a different ballot than the one required by the software, and therefore reported the wrong voter choices. Another common reason for a discrepancy is that the audit board made a mistake when inputting the voter choices into the software. In addition to these two common discrepancy types there are other less common reasons. Each audit, staff in the Colorado Department of State examine all of the discrepancies reported during the audit, whether overstatements or understatements, or whether they are in targeted or non-targeted contests, to determine the probable cause of the discrepancy. Since the 2020 State Primary a report has been posted to the Audit Center on the Secretary of State’s website that explains the cause of each discrepancy. From audits before the 2020 State Primary all data from each audit has been posted in full as well.

There have not been any cases since Colorado began doing risk-limiting audits where a discrepancy was the product of the voting system switching voters or otherwise not working as intended.

Q10. Why do some counties have to audit more ballots in subsequent rounds if their audit boards didn’t report any discrepancies in a target contest?

Q11. What is the difference between a ballot and a ballot card?

Q12. Why does Colorado conduct a risk-limiting audit?

A12. In 2009, the Colorado General Assembly began the process of requiring the implementation of risk-limiting audits by enacting 1-7-515, C.R.S. The first audit was delayed a few years as technology caught up to the task. In the 2017 Coordinated Election, all of the counties that use machines to tally votes performed the first statewide risk-limiting audit. Risk- limiting audits are considered by election experts to be the highest standard post-election audits.

Q13. How can I get involved with the audit?

A13. Since the audit is performed at the county level, you can contact your County Clerk and Recorder's office to get involved in the next audit. If you're interested in reports from former audits, you can go to the Secretary of State's audit center.

The Canvass of an Election in Colorado is the accounting of an Election after all eligible and timely ballots are counted and tabulated.  This number of ballots cast is compared to the recorded number of registered voters who were checked in as having cast a ballot.  All major political parties attend the Canvass after the Election to make inquiries, be in receipt of the Canvass Report from the Clerk & Recorder as the Designated Election Official.  Once satisfied, the Canvass Board signs the Canvass signature sheet and the Clerk & Recorder moves to Certify the election results as Official, and issues Certificates of Election to successful candidates and coordinating entities.  Official, certified results are transmitted by the County Clerk & Recorder to the Secretary of State by the Statutory deadline after each election.