Sheriff Jaime FitzSimons leads the Summit County Sheriff’s Office, where he directs the work of 73 dedicated law enforcement and civil employees in their duties to serve the residents and visitors of Summit County, Colorado. He first joined the organization in 2006 and has served as Patrol Deputy, Detective and Operations Division Commander.

FitzSimons was born and raised in Los Angeles, California, where he was an avid surfer, skateboarder and competitive marathon runner. He joined the Los Angeles Police Department in 1990. From 1990 to 2005, FitzSimons served in various patrol assignments, the Special Problems Unit, the Gang Unit and undercover narcotics work. 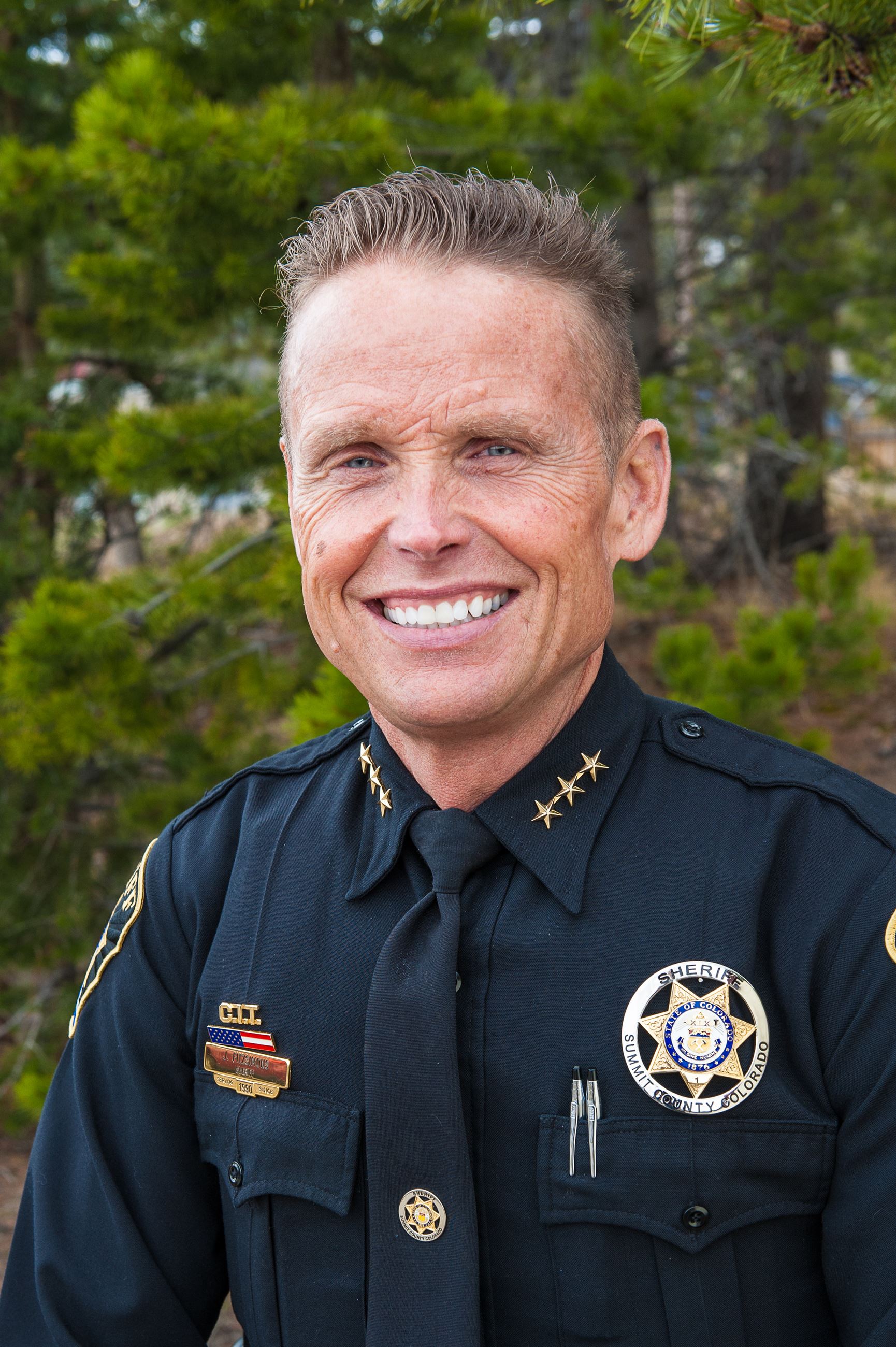 During his tenure with LAPD, FitzSimons was promoted to the ranks of Patrol Sergeant and Detective. In those positions, he investigated complex murders, robberies, sex crimes, crimes against persons, gang crimes, burglaries, thefts, frauds, embezzlements and narcotics violations; he also conducted covert surveillances and personnel complaint investigations. FitzSimons participated in responses to numerous historic incidents and events, including the Los Angeles Riots (1992), Malibu Wildfire (1993), Northridge Earthquake (1994), O.J. Simpson Murder Case (1994), Malibu Floods (1995), North Hollywood Shootout (1997) and Southern California Wildfires (2003).
FitzSimons moved to Summit County in 2005, briefly serving in the Summit County 911 Center. In 2006, Sheriff John Minor recruited him to join the Summit County Sheriff’s Office as a Patrol Deputy. FitzSimons was promoted to Detective in 2006, drawing on his expertise gained in Los Angeles to conduct complex criminal investigations. In 2008, FitzSimons was promoted to the rank of Operations Division Commander, overseeing Patrol, the Criminal Investigations Division and Special Operations. In addition to oversight of functional operations, he also ensured compliance with policies, procedures, regulations and standards. He also filled the roles of both Sheriff and Undersheriff in their absence. In 2013, FitzSimons took on the added responsibility of leading the Summit County Combined Special Weapons and Tactics Team (SWAT).

FitzSimons was elected Summit County Sheriff on November 8, 2016. FitzSimons has spent his career building and maintaining partnerships and collaborative relationships with numerous local agencies and organizations, as well as state and federal agencies.

In 1990, FitzSimons married his wife Lena; the couple have two grown children who also call Summit County home. Sheriff FitzSimons has traded his surfboard for skis, but still enjoys skateboarding. He is an avid outdoorsman who also enjoys hiking, mountain biking, trail running, snowshoeing and snowmobiling.

FitzSimons has served as a technical consultant in the film industry on numerous projects, including "Street Kings," "End of Watch," "Prisoners," "Sabotage," "Nightcrawler," "Fury," "Southpaw," "Stronger" and "Bright."


Peter Haynes was born and raised in Barkhamsted, Connecticut, where he enjoyed skiing, riding bikes, and playing soccer. He started his Law Enforcement career in 1987 and worked for the Simsbury Police Department from 1988-2008. Haynes served in various roles with the Simsbury PD including Patrol, Community Relations, Recruitment and Training, as a Team Leader on a Regional SWAT team and on a Regional Undercover Drug Task Force.

During his tenure with the Simsbury Police Department he was promoted through to the ranks of Patrolman First Class, Corporal, Patrol Sergeant and Training Sergeant. Haynes feels fortunate to have worked with a very progressive police department and in so many different roles. 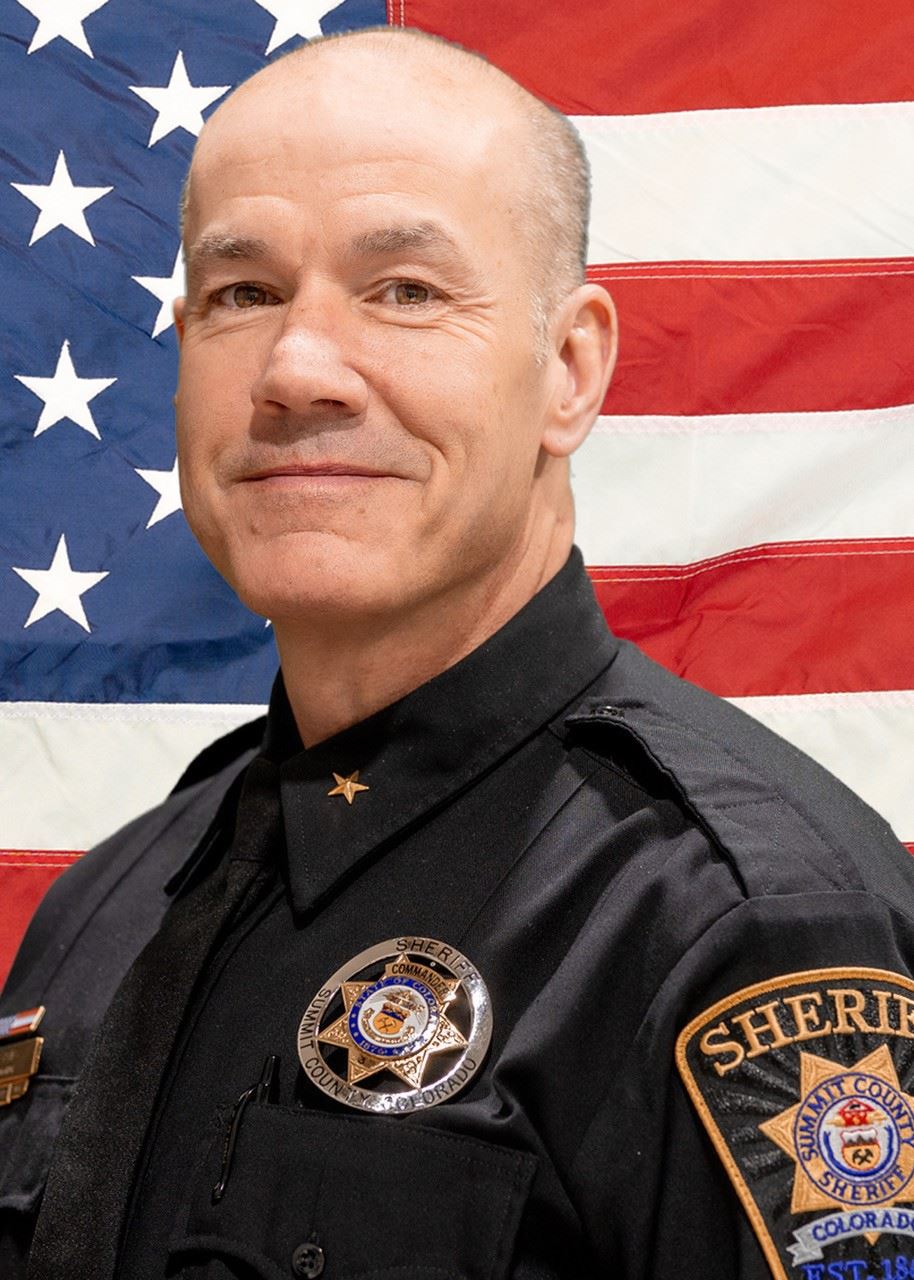 Haynes moved to Summit County in 2008 and worked for the Frisco Police department for a year before taking a position with Vail Resorts. He worked for Vail Resorts for 10 years, most recently holding the position of Director of Security for Breckenridge and Keystone Resorts. Haynes oversaw all security operations both on the mountains and in the hospitality divisions. He also led the Security Best Practice group comprised of all Security managers across all of the Resorts owned and operated by Vail. He practiced and refined many of his leadership skills while working for Vail.

While working for Vail in the corporate world was a wonderful experience, Haynes is very excited to be returning to law enforcement and serving the citizens of Summit County.

In 2001, Haynes married his wife Shannon and they have two children. One in high school and one who is off at college. They all enjoy Nordic skiing and Haynes also serves as the President of the Summit Nordic Ski Club, a nonprofit helping kids at all levels of Nordic skiing. Haynes also enjoys backcountry skiing, riding road and mountain bikes, hiking and trail running and now watching soccer, either his son in college or any professional teams play.

Animal Control has 10 staff, more than 100 volunteers, a pre-K-12 humane education program and a Summit County Animal Response Team that trains to respond to disasters. The shelter takes an active role in promoting animal welfare by working with several other Colorado and out-of-state shelters as transfer partners. The shelter houses approximately 824 animals each year, 71 percent of which are adopted; 22 percent are redeemed by their owners. 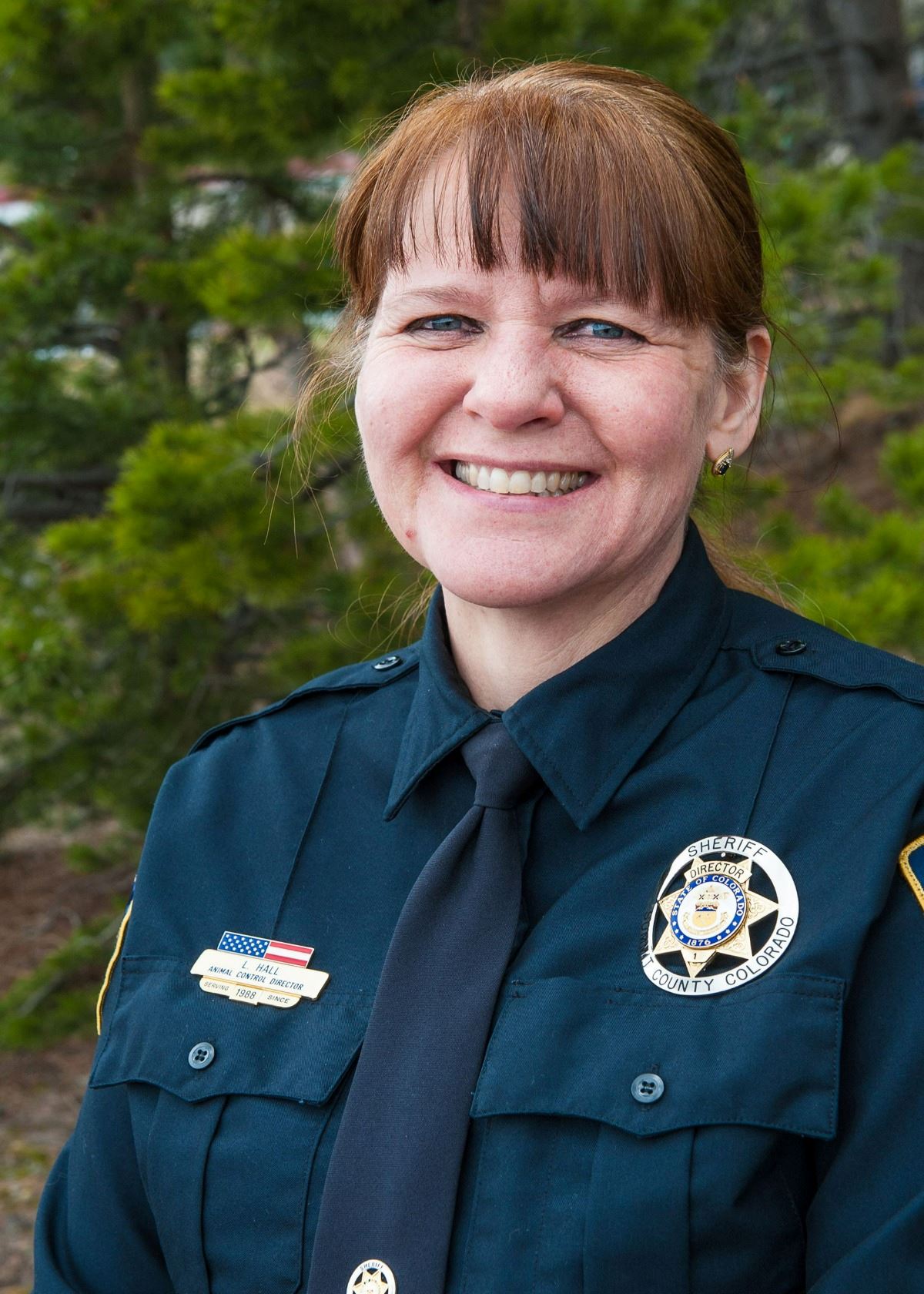 Hall has worked for Animal Control since 1988, when she started as an Animal Control Officer. She was promoted to Animal Control Supervisor in 1993, and to the Director position in 2010. Hall grew up in Independence, Ohio, with a strong interest in pets and wildlife and a desire to live in the Rocky Mountains. With these goals in mind, she earned a bachelor's of science degree in Wildlife Conservation and Management from the University of Wyoming and a commission as an Army Second Lieutenant. During her college years, she worked as a ranch hand outside of Cody, Wyoming. After graduating, she worked for the Colorado Division of Wildlife and Wildlife International Inc. Hall served in the Colorado Army National Guard for eight years, obtaining the rank of Captain.

Detentions Commander David Bertling supervises the Detentions Division and Civil Division of the Summit County Sheriff’s Office. Bertling graduated with a Bachelor of Arts Degree from Baptist Bible College, in Springfield, Missouri with honors in 1991. In 2003, he graduated the Texas Peace Officer Academy from Central Texas College in Killeen, Texas. He attended Sam Houston State University and earned a Master of Science Degree in Criminal Justice Leadership and Management in 2013.

Bertling relocated from the Austin area in Texas to Summit County in 2018 to assume his role as the Commander of the Detentions Division. Joining Bertling is his wife Lisa, of ten years. They have five adult children. Among the many great outdoor activities, they are looking forward to are kayaking, biking, skiing, hiking, hunting, and fishing. 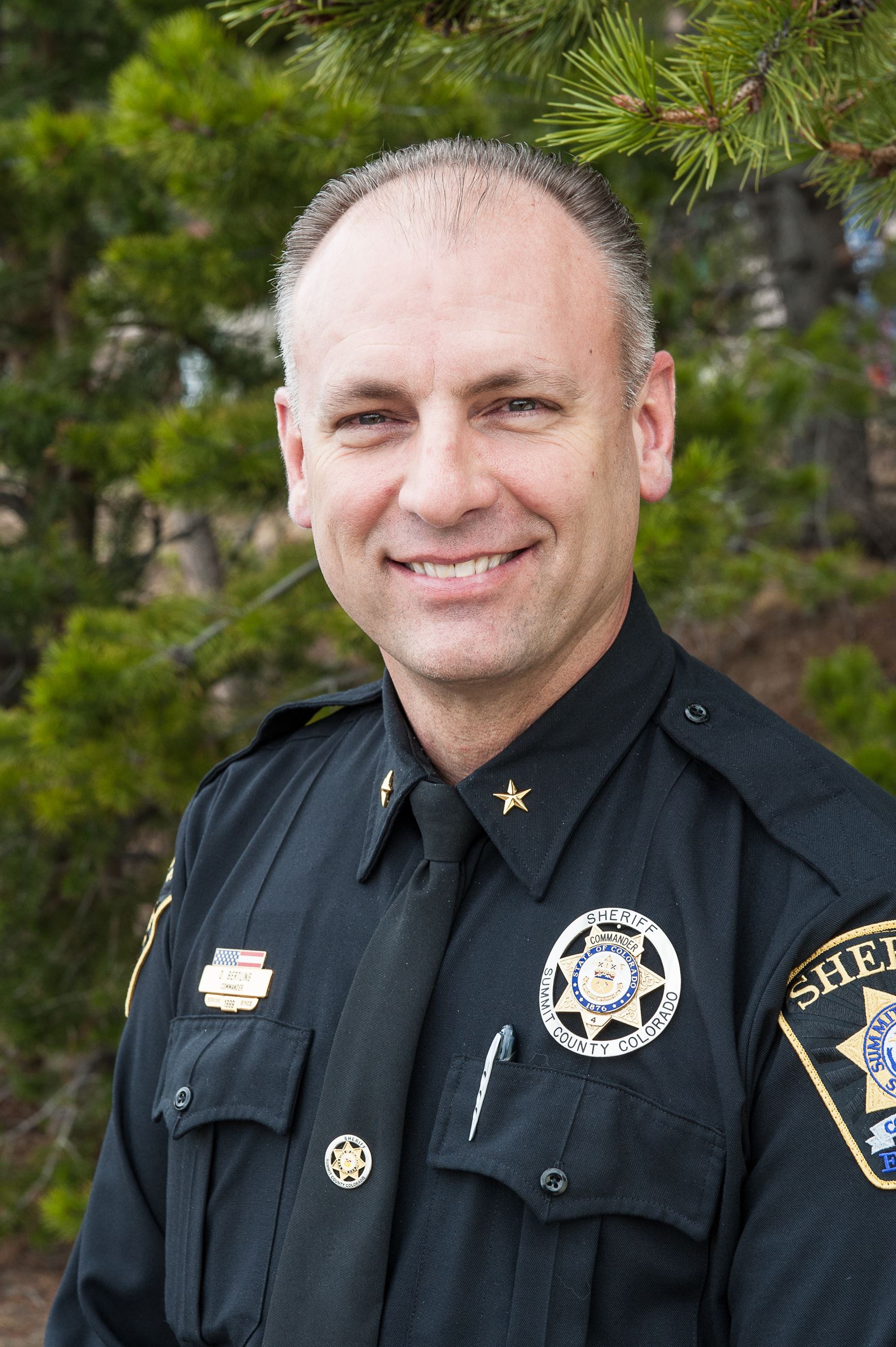 Commander Bertling started his career in law enforcement in 1999 with the Williamson County Sheriff’s Office, in Georgetown, Texas. Bertling became a Corrections Captain in January 2005, and remained in the position until 2016. He served as a Corrections Officer, Peace Officer and a Training Instructor.

Bertling served as a board member on the Capital Area Planning Council of Governments’ Law Enforcement Education Committee from 2009 to 2016. He has earned a TCOLE Texas Master Peace Officer License, Master Jailer license and TCOLE Instructor Certification.